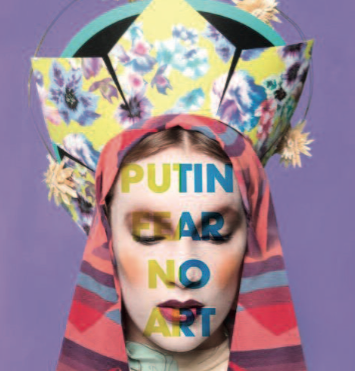 Artist Tamsyn Challenger curates a new exhibition this summer of works of art made in protest to Pussy Riot’s imprisonment by the Russian government in 2012: ‘Free The Pussy’.

At the end of 2011 an anonymous feminist punk collective wearing luminous balaclavas performed a series of unsanctioned gigs or interventions in opposition to Vladimir Putin’s government and its association with the leadership of the Russian Orthodox Church. This collective championed gender equality, LGBT rights, environmental activism and called for a female president. They challenged masculine authority and stood for freedom of expression.

They were and are the PUSSY RIOT.

In March 2012 three members of the group, Nadezhda Tolokonnikova, Maria Alyokhina and Yekaterina Samutsevich, were arrested and convicted of “hooliganism motivated by religious hatred”. They were sentenced to two years’ imprisonment. An appeal released Samutsevich on probation but the sentences of the other two women were upheld.

Having been publicly unveiled the women faced an all too common misogynist response online including threats of rape and burning. Nadya, Masha and Yekaterina were labelled ‘whores’ , ‘sluts’ and ‘mad vaginas’ after Russian priests, discussing them, mouthed the word ‘vagina’ in TV talk shows, as there is no equivalent word in the Russian language for pussy.

At trial the judge stated that they had “crudely undermined the social order”. The ‘Punk Prayer’ performance inside Moscow’s Cathedral of Christ the Saviour that led to their incarceration lasted for 40 seconds.

International censure of the trial and sentencing followed and the women became global feminist icons. The Pussy Riot’s ‘Punk Prayer’ was seen as a call to arms by artists and activists around the world. In 2012, Challenger, along with many other artists, was asked to contribute to a book called ‘Let’s Start a Pussy Riot’, brought about by London feminist collectives, Girls Get Busy, Not So Popular, Storm in a Teacup and the performer Emely Neu. It was published by Rough Trade in 2013.

This new exhibition aims to be an archive of the global protest in support of the Pussy Riot’s call. The show will include artist responses that can be seen in the book, alongside many others who stood in condemnation at the women’s imprisonment. This is the first time many of these pieces made in protest have been brought together for display.

All of these works are as relevant now as they were then and stand as a testimony to the power of a woman’s voice.